It’s been one year since we launched Social Savanna  and we wanted to share how far it has come in just a year, with the support of the community.

We have a few Imgurian testimonials, but we wanted to start with one of our own.

In December 2013, I posted to see if you were serious about having your own dating site.

We received so much positive feedback that I didn’t sleep that night: private messages, comments, and lots of offers to help.

After a lot of coffee, we discovered what you all really wanted was somewhere you could hang out, chat, game, and maybe even meet other Imgurians in real life.

So Sam and I got to building Social Savanna, a social network just for Imgurians.

As we posted each update. the support was truly overwhelming, so much love.

Finally, we launched in February 2014, expecting maybe a few thousand signups. Instead, we got over 13,000 in the first 24 hours!

It was insane – the servers were on fire. The chatroom – we only had one to begin with – had hundreds of people in it.

I’ll never forget that night. It was horrifying, but the beauty of it still brings a tear to my eye when we think about it.

This last year has been amazing. I’ve seen so many of you find hope, friends, and even fall in love.

I’m getting emotional even writing this, but I want to thank everyone who has been a part of Social Savanna this past year, for giving my team and I this opportunity.

You’re beautiful, wonderful people, and I want you to always remember that. 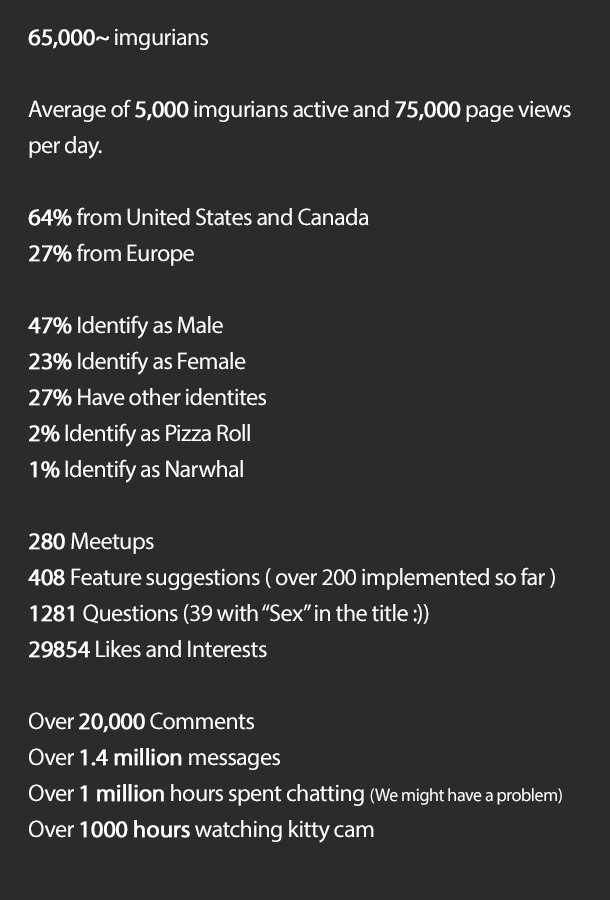 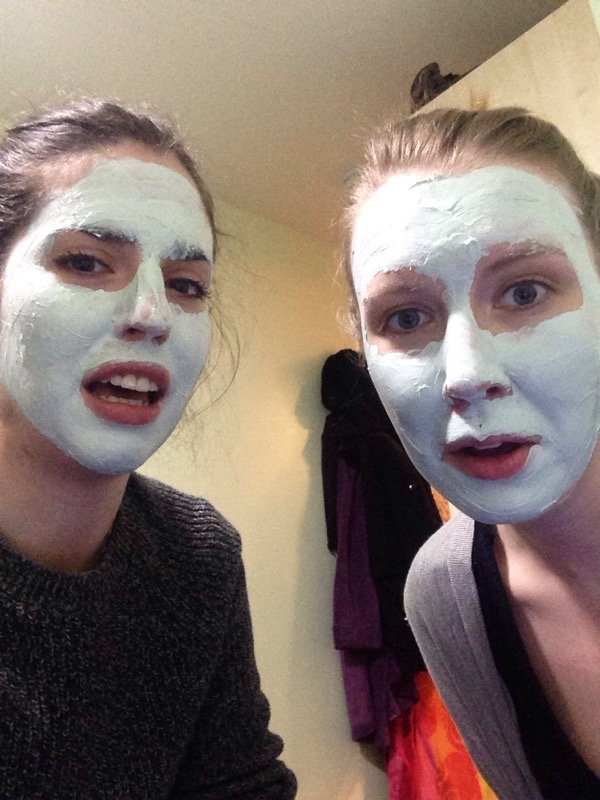 “Once upon a time, there was a boy called Jack whose story is about growing a magic beanstalk and climbing all the way up to Giant Land. This is that story.

“Oh wait, no it’s not. It’s the story of @jackandthebeanstalk and myself, @stoneymalone.

“I can’t even remember how we met. Well, Social Savanna, obviously; but it may have been in either UK Chat, Europe Chat or General Chat. Who knows!

“I should also mention that a group of us from UK Chat decided to do a little Secret Santa; lo and behold, @jackandthebeanstalk had me. I received fabulous things. A little R2D2 lego keychain, some temporary tattoos, a chunky KitKat, and bubbles. Sadly, I couldn’t get the bubble film lid open, ’cause I was lazy and realised the bloody thing didn’t have a little stick to blow the bubbles with, so I put it away and forgot about it.

“Well, we’ve known each other for many months now and we finally managed to arrange a meetup that fit in with both of our schedules. This day would be he sixth of February 2015. We didn’t have a concrete plan as such, except to go out to a club on the Friday night and then spend Saturday and Sunday recuperating from these shenanigans.

“Long story short, I picked her up from the station, we stuffed our faces with pizza and then hit a club night another friend from SoSa has recommended.

“Many alcohols was consumed. Fun was had. Sadly, the average age there was about 18, which sucks if two single ladies are on the prowl. (No, we weren’t, what are we, thirsty? >.>). But as expected, we had a hella good time, got home way too later and ate more pizza.

“Actually, before we move on… Remember those bubbles? Turns out that when you remove the foil, there’s a little blowy stick thing INSIDE the bubble liquid. So I was too stupid to think of that and kept myself from bubble-blowing fun for two months! Luckily, we figured it out in time for our glorious weekend.

“Saturday consisted of lying in bed until we decided to get sushi for lunch – best decision ever. Following that, we watched Aladdin because Disney rocks, LOL because Hannah Montana and Miley Cyrus and why not (don’t watch, it drags on forever) and some other Disney Channel production, which was terrible. As we’re adults, we had Eton Mess (for non-Brits: cream, meringue, and fruit) for dinner and nachos for dinner.

“On Sunday, we made bacon, brie, and cranberry paninis and then I had to take her back to the station, which involved traffic, running, and nearly missing the train.

“@jackandthebeanstalk: It was an absolute pleasure having you hear and I can’t wait to hang out again soon!” 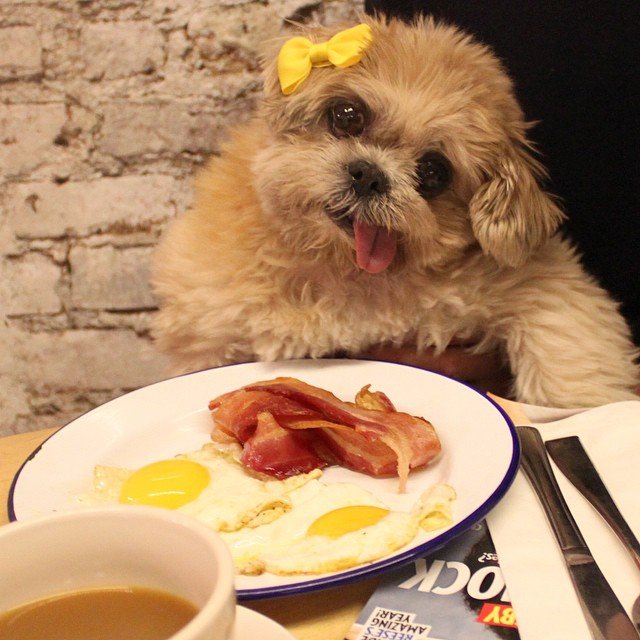 “So this is going to sound sort of sobby and shit, I apologize for that.

“Basically, I’ve been depressed for the past 3/4 of a year, maybe longer.

“Life stuff hasn’t gone fantastically, I’ve been bottling emotions from the death of my father a year ago, having to put down my cats, and all sorts of other shit.

“In October, my girlfriend of the time left me, she said I was just too draining on her, and all of my friends at the time sort of picked her side and I was left with nobody.

“I went to a psychiatrist, a therapist, and a whole handful of doctors who’ve collectively prescribed me 12 different medications (of which I’m still on 6).

“Over November I came close to killing myself a few times, turned down a position at my dream job, and – for lack of a better timesink – I started talking to people on SoSa in the general room.

“It’s January now, and I’ve actually made lots of friends. I have people to talk to now, and something to actually look forward to.

“I like to attribute the fact that I’m still around to some of the people on SoSa.” 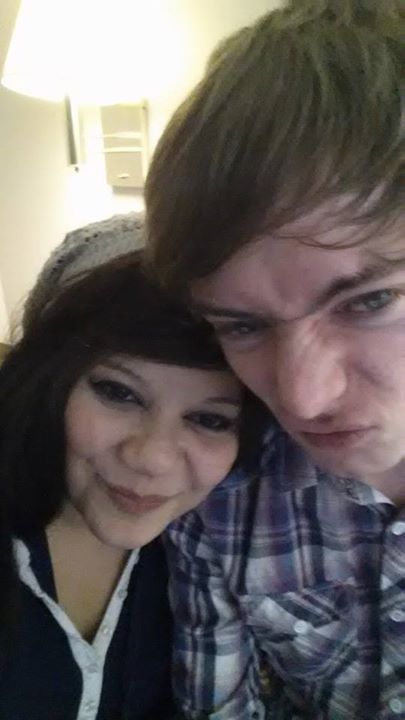 “All in all, Social Savanna and its community (along with the community of Imgur) has really helped me through a lot.

“I’m a recovering heroin addict of five years, been sober for a year and a half (since about the time I signed up for Imgur).

“For the last year, I’ve been going through multiple hurdles and have had a lot of stress.

“Thankfully, the people of Social Savanna had been there to help me through these rough times.You really start to form a family with these people.

“A few months back, my family had lost their house and my PC had gone into storage (never recovered).

“One night, I was with a friend, telling them how much Imgur and Social Savanna had really impacted my life. After having a deep discussion with them, they offered to let me use their PC.

“After not being on for months and randomly signing back into video chat one day, I met someone who is now a very big part of my life, his name is Emlyn Dewar (actually everything to me). We soon became close, then started talking to each other via Facebook every day.

“Within a week, we had become very close and we both noticed that the other was different from anyone we had ever talked to.

“As of mid/late September of last year, we started dating. Now I know that a lot of people don’t really understand how long distance relationships can work, he bring from Scotland and me being from Virgina, US. It was still a connection that I had never made with anyone before.

“After three long months of dating over the internet, talking each and every day from the moment I wake up ’til the time he goes to sleep, the time had finally come! On December 22nd of last year, he flew here from Scotland and spent 18 days with me.

“It was truly the best experience of my life. Only confirming what we had previously thought, that we were indeed perfect for each other and that we both knew we wanted to spend the rest of our lives together.

“As of this year, my new goal is to move over to Scotland to be with this man forever. Truly, I have never been so in love in my life.

“No matter the distance. Sometimes you  just really known that there is a connection there that I’ve never made with a person before.

“I do thank Social Savanna for bringing us together. It’s an amazing way to connect with people.

“For everyone out there who thinks that true love doesn’t exist, all I can say is… YOU’RE WRONG, and that if something is meant to be, no matter the circumstances, it will happen. Thank you so much, Social Savanna, for making it possible to bring people together from all over the world.” 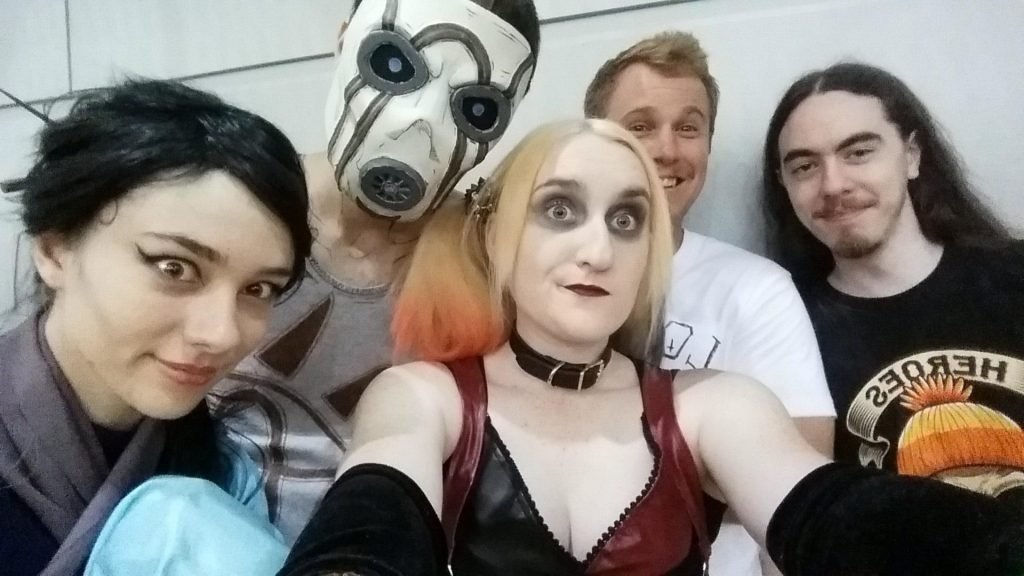 “AusChat is a tight-knit community, that worships Potato. Many do not know where Potato came from, or why we worship it, but find themselves worshipping along with us. Not only this, but we’ve even spent time near each other, to worship Potato together, in love and harmony.

“On a serious note. We have become close friends over time and are always welcoming newcomers. Have had numerous meetups and regular Google Hangouts and Cards Against Humanity games. 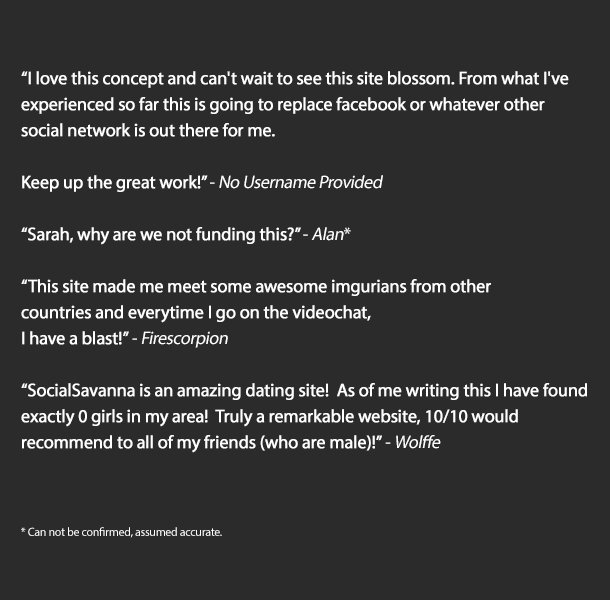 We received quite a few testimonials, so we chose the ones we really enjoyed reading. We can do a separate post with more, if you’d like 🙂

Thank you to the mods, the team, and the Imgur team, especially @sarah and @jasdev.

Without you all, this post wouldn’t be here today, you’re awesome.

Anyone who visits tonight/tomorrow, we’re overdue software upgrades for a while. We’re in the middle of uploading them now, so the site might be a bit shaky/go offline for a short period.

There is still a lot to come from the site; I hope you follow us over the next year and see what good the community can do together 🙂

Much love and kisses,

— Anyone who does join tonight —

We’re uploading a lot of changes and upgrades to the software. The site will become more user-friendly, fasters, and less buggy within the next 48 hours.